President Buhari has once again displayed his comic side to Nigerians as he was captured on video checking who his wife Aisha voted for.

The President was reported to have cast his vote as early as 08:15hrs, moments after the arrival of the INEC agents at his polling unit in Daura, Katsina State.

But immediately after casting his vote, as he made way from the polling unit, the President made a brief stop beside his wife to peep on if she had voted for him or for another of his opponents. 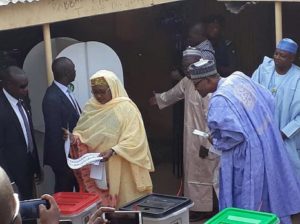 Aisha Buhari, who was caught unawares smiled as she caught her husband peeping through her shoulder. The President also smiled about the situation and moved away from the point.

The hilarious moment was captured on video and the video has since gone viral. 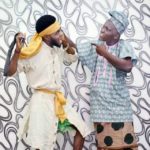 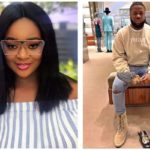 Next Article Jackie Appiah Allegedly Sleeping With Hushpuppi For Money

Delta State College of Education Provost, Warri, Mary Edema, has been accused of using a whopping N36million in the building of two toilets in a […]

Because of ‘what happened to’ Amber Heard, Johnny Depp’s ex-girlfriends are afraid to openly accuse him of violence. Heard, 36, told Savannah Guthrie on NBC’s […]

Two grown men took to the streets to fight each other over a woman. In a video shared online, both men are seen throwing punches […]

The federal government has released names of Nigerians who died from Coronavirus complications abroad. Abike Dabiri-Erewa, chairman of the Nigerians in Diaspora Commission (NIDCOM) put […]