On the 11th day of October, 2021, the leadership of Freedom Ambassadors Organization led by comrade Curtis Ogbebor made the decision to challenge what we believe to be an unconstitutional move by the Edo State Government by a Publication signed by the Secretary to the Edo State Government dated the 6th day of October, 2021, the Government expressed it’s intention to control and regulate Non-Governmental Organizations in the State, a move we believe to be illegal, unconstitutional, unconscionable and against the right to freedom of assembly, guaranteed under the Constitution of Federal Republic of Nigeria.

We filed an Originating Summons, a Motion on Notice and a Motion Ex parte at the Federal High Court, Benin Judicial Division asking the Honourable Court to restrain the Edo State Government from attempting to tamper with the activities of NGOs in the State, especially our organization.
Tod, the 1st day of November, 2021, the Motion Ex parte came up for hearing before His Lordship sitting in Court 1, Federal High Court, Benin Judicial Division.

F. C. Asiazobor, Esq. appeared for the Claimants/Applicants. Counsel informed the Honourable court of the pending Motion Ex parte and sought the permission of the court to move the application. However, His Lordship pointed out that the supposed date of commencement of enforcing the directives contained in the Edo State Government publication (being 29/10/2021) has since passed and it would be neater to proceed to take the Motion on Notice, since the Government has not made any further move to tamper with the subject matter of the suit. Consequently, the Honourable Court ordered that the Edo State Government (the Defendants) be served with the court processes and admonished that once a suit has been instituted, parties ought to maintain status quo. Case adjourned to 16/11/2021 for hearing of the Motion on Notice. 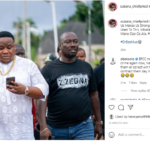 All You Need To Know About Premium Quality “Aplus Perfumes”

Do you know that oil perfume is grade by grade? Same bottle but different content. The best grade is PREMIUM QUALITY. It is not about […]

Photos of the All Progressive Party presidential candidate Bola Ahmed Tinubu being welcomed to Kaduna state ahead of the party’s rally. Gov. Mallam Nasir El’rufai […]