Ayra Starr made the best choice when she featured Ckay on her recently released song Beggie Beggie.

The song is topnotch and only those that know good music will understand what I mean.

Beggie Beggie by Ayra and Ckay is a song that tells a story of two people in love and trying to fight the temptation of jealousy.

You man want to know the meaning of Beggie Beggie.

Beggie Beggie means someone that begs all the time.

The song is quite interesting from the beat to the lyrics while the video summed it up with a beautiful storyline. 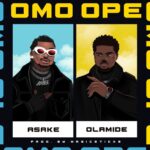 Omah Lay- released a new song titled “understand” the song was released on July 8 2021 and currently one of the trending song on audiomack. […]

Davido’s Album A Better Time has been making wave as The Best Featuring Mayorkun becomes the most downloaded and streamed song on his audiomack account. […]