The Chief of Staff to the president, Abba Kyari has died. He died on Friday April 17, more than two weeks after he tested positive to Coronavirus.

”The Presidency regrets to announce the passage of the Chief of Staff to the President, Mallam Abba Kyari.

“The deceased had tested positive to the ravaging COVID-19, and had been receiving treatment. But he died on Friday, April 17, 2020.”

”May God accept his soul. Funeral arrangements will be announced shortly.”

Ahmad tweeted, “Chief of Staff to the President, Mallam Abba Kyari, has died. May Allah forgive his shortcomings and grant him the highest rank of Jannah. Allah ya jikan sa”.

Previous Article (video): Suspected robbers caught in Ikotun beg for mercy as they were tortured 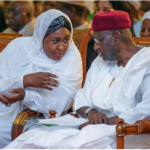 Because of ‘what happened to’ Amber Heard, Johnny Depp’s ex-girlfriends are afraid to openly accuse him of violence. Heard, 36, told Savannah Guthrie on NBC’s […]

A teen mum who left her daughter at home to starve to death, while she travelled to celebrate her 18th birthday, has been jailed for […]

Yusuf Datti Baba-Ahmed is a 46 year old Academician, Businessman and Nigerian politician. He was a member of the House of Representatives between 2003 and […]