Popular actress Juliet Ibrahim has called on thunder to strike any man who is dating more than one lady.

With Valentine’s day fast approaching, the beautiful actress took to social media with praises for men who have only one girlfriend.

“To all the guys with one girlfriend may God bless you financially this year! Amen.”

She, however, cautioned her followers who have more than one girlfriend to not type amen so as to avoid incurring the wrath of thunder.

“If you type Amen and you know you’re lying the thunder, the thunder”.

It would be recalled that the screen star formerly dated Nigerian rapper Iceberg Slim. Their relationship, however, ended up in disaster with both of them washing their dirty linen in public. 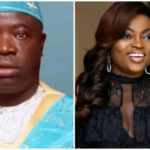 Next Article Prophet Who Predicted Barrenness For Funke Akindele Speaks

Sergeant Chinatu Onyema, the killer cop who has been on the run after killing a staff of Abia State Board of Internal Revenue (BIR) and […]